You are here: Home / Archives for USS Midway 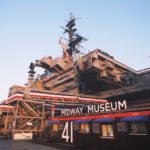 Intesa partner and public affairs strategist Maddy Kilkenny has been named to the prestigious USS Midway Museum board of directors. The USS Midway opened as a museum in June 2004 and is the most popular naval warship museum in the United States. The USS Midway was America’s longest-serving aircraft carrier of the 20th century, from 1945 to 1992. Approximately 200,000 sailors served […]