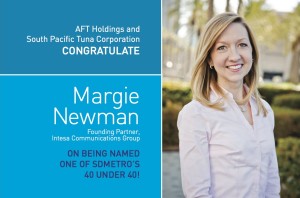 Intesa founding partner Margie Newman has been recognized as one of San Diego’s best and brightest by SDMETRO Magazine, which has named her a recipient of the 2016 40 under 40 award.

In San Diego, Ms. Newman has gone from an unknown to ubiquitous in just four years. Since relocating from Washington, D.C. in 2012, she founded Intesa Communications Group, a full-service PR and government relations firm providing award winning strategic counsel to clients nationwide. Ms. Newman also serves as a San Diego Council on Literacy board member and as Vice Chair of the San Diego Regional Chamber of Commerce public policy committee. She is a member of the LEAD San Diego IMPACT Class of 2015, and a soon-to-be-graduate of the San Diego Public Leadership Institute Class of 2016.

“It is a privilege to be named among the 40 under 40 winners, and a delight to share the honor with many other San Diego business and civic leaders I admire,” Newman said.

Ms. Newman is a Nashville, Tenn. native and Auburn University graduate. In 2008, she was named among PR News’ “Top 15 to Watch,” a national award recognizing 15 of the country’s most outstanding public relations professionals. She currently lives in Little Italy with her two children, Suzianne (4) and CJ (2).

SDMETRO Magazine will honor this year’s 40 under 40 recipients at an awards luncheon on Friday, September 16, at the Sheraton San Diego Hotel and Marina. View the online version of the magazine here.

Founded in 2012 in San Diego, Intesa Communications Group is a San Diego-based communications and government relations firm doing our best work for people and causes we believe in.